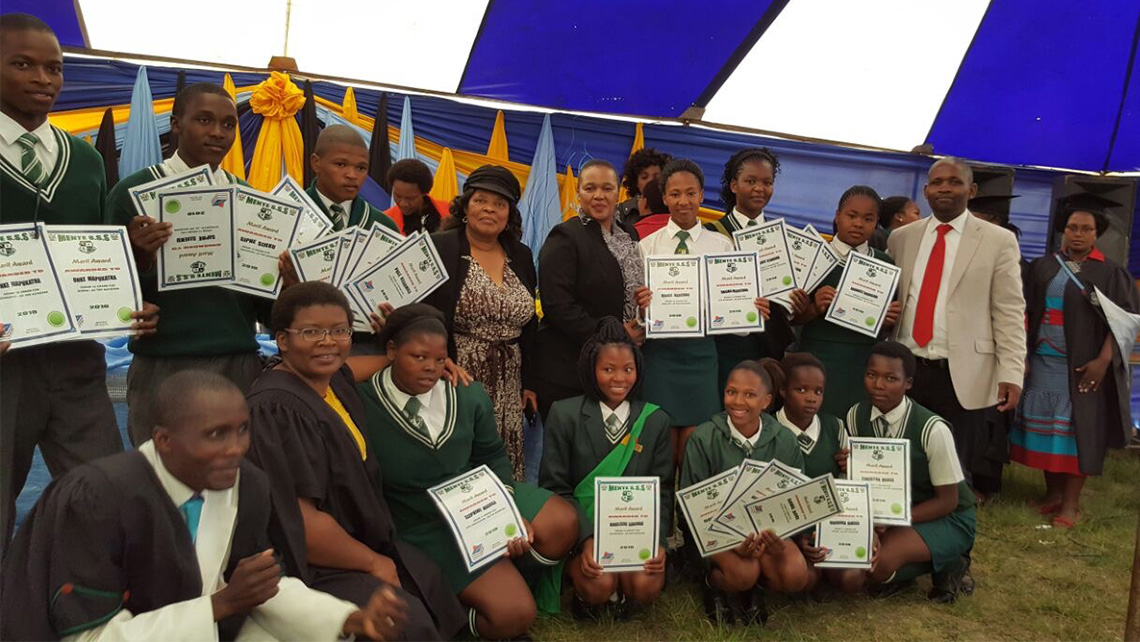 Elungile Mzimba, second from left in the front row, with teachers and learners proudly displaying their merit certificates. Photo: Supplied.

Touched by the miserable learning conditions of learners in her rural Eastern Cape, Elungile Mzimba intervened through educational outfit Masiqaqambe to assist them

Elungile Mzimba (38) was born in Qumbu, north of Mthatha, and raised by her grandmother until the age of 10. She then went to live with her mother in Mthatha and she moved again in 1993 to East London, where she attended Cambridge High School until she matriculated in 1996.

Her mother, who was the main breadwinner, used to work for the department of labour in the then Transkei government. In the early 1990s she was forced into retirement but her pension payout mysteriously went “missing” for a few years, pushing the family into dire financial straits.

As a result, Mzimba’s dream of enrolling for a chemical engineer at university never materialised and she was compelled to study for a diploma in mechanical engineering at Border Technikon, now known as Walter Sisulu University of Technology.

She started working in 2000 as an engineering student at Eurotype Test Centre – a subsidiary of the South African Bureau of Standards (SABS) – that focuses on automotive safety. Soon after this her star started to rise. At just 22, Mzimba was promoted to head of engineering components, and four years later she became a business unit manager.

She joined Nokia Siemens Networks in 2008 as a project manager dealing with two major continental clients: Malitel (Mali) and Sonatel (Senegal). She was then headhunted by Denel Land Systems as a business process specialist, and promoted to senior manager: business planning. In 2014, Mzimba joined Eskom Rotek Industries as a business development strategist. At the moment she is the executive manager: Project Management Office at Conlog in Durban.

Mzimba has a string of academic qualifications under her belt: a Diploma in Project Management from Varsity College, a BTech Quality from Unisa and an MBA from the Gordon Institute of Business Science and Unisa.

What is Masiqaqambe all about and why was it started?

I used to spend most of my school holidays with my granny in Qumbu. And in 1996 during one of my regular visits to the area I became aware of the struggle some of my friends were faced with. I noticed they had very little resources and this impacted negatively on their preparations for their final examinations. For instance, the quality of revision question papers they had differed vastly from those that we used in Cambridge.

Similarly, my fellow students at Border Technikon — most of whom I must say were intelligent — had enrolled for mechanical engineering, but it later became clear that they would have rather better off in a medical studies class, learning about human anatomy instead of engines! They didn’t even know what mechanical engineering was before they enrolled for it. As a result, most of them could not cope with their studies and were forced to drop out, though they still had to pay for their study loans. These disparities touched my heart so deeply and I vowed that one day I would get an opportunity to do something about this issue.

While on holiday in 2012, a relative asked me to assist learners at a nearby high school that had problems and desperately needed positive role models who could relate to their backgrounds. This re-ignited that old wish I had of trying to assist in rural schools.

Upon my return to Joburg, I invited all the professionals in my network to meet. The first meeting took place in February 2012 and we came with so many bright ideas, and it was clear that this could not be just a once-off thing. We agreed on the name “Masiqaqambe”, which in Xhosa means “let’s stand out” or “let’s be bright”. It was to be used as a motto for the learners who become part of the project. It has since become known as MasQ.

What are its objectives?

MasQ aims to mentor rural learners and guide them to pursue their dreams by providing them with the necessary academic support. Learners with dreams tend to be more disciplined and dedicated in their studies than those who do not understand where they are headed to.

The first school we started with in 2012 was averaging a grade 12 pass rate of 38%. After our intervention the pass rate shot up to 73%, and improved even more the following year. In addition, there was a noticeable change in the academic culture and attitude of the learners at the school.

MasQ takes a holistic approach: it addresses the whole support system of the learner with a view to making the child’s life better. The support also includes parents and/or guardians, teachers and the local leaders in that community. Another school that we adopted moved from a 6% pass rate to 93% pass rate (average) and got a top position in maths, science and economics in its district. The school is situated in an area that is difficult to reach by car. I remember we had to leave our cars at the police station in town and a local chief came to fetch us with her bakkie. It was worse on rainy days, as streams and rivers would overflow.

We also came to realise that access to information and resources is the biggest gap between rural and city learners. As such MasQ donates textbooks, scientific calculators, study guides, past exam question papers, and various study aides for the teachers. Furthermore, we donate a brand-new laptop to the top grade12 learner in each school, on condition that the learner has enrolled in a tertiary institution.

We also offer distant mentorship whereby learners can place a call and ask career-related questions or assistance with some life choices. MasQ has also paid registration fees for learners who could not secure financial support, let alone afford university fees. All those learners have since been granted NSFAS loans and some even obtained bursaries.

Currently how many schools does the project cater to, and how were they chosen?

We are involved in only three schools due to limited capacity. We did not choose schools; instead we were invited by the principals. There are more invitations pending, but we need to significantly increase capacity first.

Any plans to expand MasQ outside the Eastern Cape?

MasQ is open to training duplicate teams that can go anywhere else in the country. There have been some requests before, but the interest hasn’t been high enough. As it stands, the need in the Eastern Cape is far greater than we had imagined, and we are still going to operate there for a few more years before venturing into other provinces.

What is your advice to teachers who have to inspire learners from impoverished households?

Put yourself in their shoes and offer them that which you wished your teacher would have done for you. There is a saying “Be who you needed when you were younger” — I think this is a very profound way of thinking that any teacher can adopt.

And your message to learners?