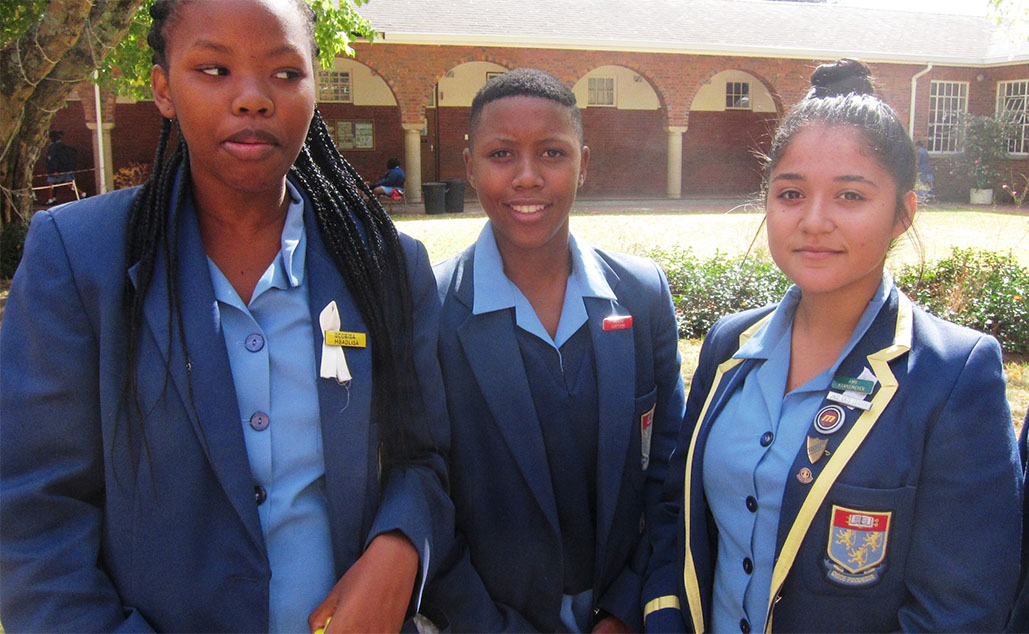 "We don't want to be colonised", became a war cry as girl learners in former white schools across the country protested against their schools' hair policies. Photo: Marilyn Honikman.

“We don’t want to be colonised”. This is what senior girls at Cape Town’s San Souci Girls’ High School announced through social media and then on placards late in 2016. There had been rumblings for years about the school’s hair policy until the situation blew up in schools around the country, and the former model-C school was in the eye of the storm. Principal Charmaine Murray was suspended shortly thereafter, and then she retired.

Her successor Teresa Humphreys says girls came to San Souci because they wanted a good education; they wanted access to the wonderful resources and to the good teaching the school had offered, with very sound academic results, for over 60 years. But the school’s attitude to black girls was: “Come here and be like us!”

When the protesting girls held up a placard that said, “We want to be proudly African in Africa,” they encountered a brick wall. This was too much for Murray, and perhaps some other members of staff, to take in. Humphreys told the Teacher, “Even in language policy there was institutionalised racism that we did not know was there, because we were blind to it.”  The school did not offer isiXhosa as a subject even though the enrolment was now of predominantly isiXhosa speakers, and girls were not allowed to speak isiXhosa to each other.

Emily Fairburn, a teacher who was on the team of learners, teachers and parents who drafted the new hair and language policy, recalls a girl saying to her, “It’s so sad. I don’t know the isiXhosa word for ‘adjective’. My parents want me to be good at English. I want to be good at English, but I also want to know isiXhosa.”

Fairburn explained that Murray would say she wanted the girls “to be lady-like”.  “Mrs Murray’s idea of lady-like was that of an Edwardian Englishwoman,” Fairburn added.  “The old dress and hair code was unfair on black girls. It did not take African hair into account. They were not allowed braids, they weren’t allowed Afros, and they were told to put relaxer on their hair!” Some girls felt victimised by the old system.

During the protests one girl stood on a chair in the classroom and said, “I want to look pretty. Just look at me! I don’t look pretty.” Fairburn added that the girls were in touch through social media conversations about political issues that affected them. They were actually engaging with much deeper social and political ideas. The protests were only partly about hair. “Hair symbolised the racism they were experiencing.”

When the Teacher visited the school last month we saw a range of glorious, proudly African hairstyles: short natural hair, shaved on the sides, long braided extensions and natural hair brushed out in an Afro, but held off the face with a wide Alice band. One thing they all had in common is that they were elegant. Every girl I saw in the playground during school break had taken care with her appearance. When asked to pose for photographs they did so with poise and alacrity.

The new policy also includes gender issues. Fairburn said: “There were, and are, endless gender debates going on. Even an old feminist like me does not know the new terminology, such as cisgender, and inter-sexuality.” One of the girls told us, “And now we can play soccer! We’re not just expected to be ‘ladies’ in inverted commas.”

A group of grade 12s said, “Our protests were successful. The school is a much happier place. We are developing better relationships with teachers. At first they just issued orders. Now they consider our feelings. They ask about more than school work.”

It is not just girls’ schools that have woken up about discriminatory, old-style policies. Last years’ country-wide near-riots over colonial hair policies were followed by the suspension and early retirement of some school principals at private and former model-C schools. The schools scrambled in the last months of the year to listen to what learners wanted, and then incorporated their wishes into enlightened hair and language policies.

“Our school has a new hair policy. It’s gender-less and race-less!” A grade 10 boy from Camps Bay High School (a former model-C co-ed school) told me late last year. I was a bit nonplussed. “That’s a new word. Race-less?” I said. “Well if gender-less means gender-neutral, which is what our headmaster calls it, why can’t race-less mean race-neutral?” he asked. “So the policy means anyone — boy or girl — can have hairstyles that only girls or only boys used to have, and anyone can have hairstyles like anyone of any race. So anyone can have long braids and extensions or a man-bun, boy or girl, black or white or brown.”

Camps Bay principal, David de Korte, says the discussion was started by a couple of boys who wanted long hair. The school sent out a questionnaire to survey attitudes of parents and there was an on-campus survey of learners, who were overwhelmingly in favour of a gender-neutral policy. By law governing bodies make the ruling on hair policy, and their governing body approved it.

Schools such as Mfuleni Secondary School, in Blue Downs, which has no white learners, has a fairly conservative hair policy. But the school principal, Malungisa Mlotywa told the Teacher that discussions are underway to make it gender-neutral. As soon as the governing body approves the new policy, short-back-and-sides haircuts will no longer be mandatory for boys, and another relic from the colonial era will bite the dust.